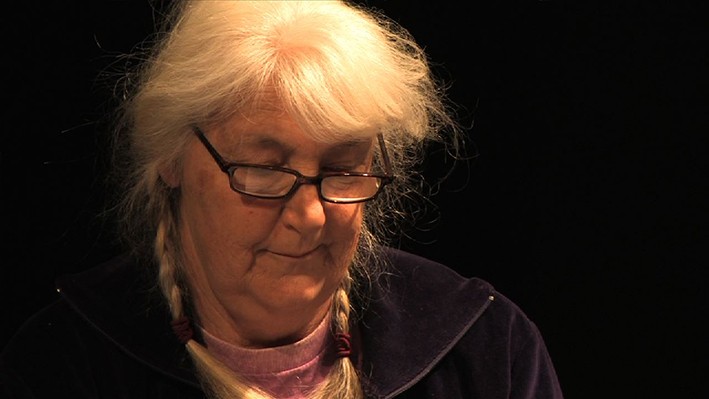 Performance at The Opera House in UmeĂĄ, April 2011.

In Godotâ€™s Waiting Room is a play made in collaboration with dramatist Gritt Uldall-Jessen. The piece was originally made for, and performed at, the space of contemporary art, Vita Kuben, at the Opera House in UmeĂĄ in April 2011.

The piece is a feminist re-writing of Beckettâ€™s Waiting for Godot. It combines text from Beckettâ€™s Waiting for Godot with that of a diary written during a house squat that took place in UmeĂĄ in 1983. A group of women squatted an abandoned yellow villa in the central part of he city in order to make politicians and the local community aware of the need for a Womenâ€™s Shelter. Before this event there was no shelter in UmeĂĄ for women and children exposed to domestic violence (a term that up to this point was generally referred to in the media as â€śapartment-rowâ€ť). The demands put forward by the women was to get a house that could serve, not only as a shelter, but also as a place for all sorts of activities by and for women. The squat was meant to go on for only a few days but ended up lasting for over three month. During this time the women made themselves at home in the large abandoned house without running water or heat, setting up activities in order to pass time while waiting for a decision about their future from the municipality.

The prologue of the play gives account of a legal process between Beckett and a theatre in Holland that occurred in 1988 over the issue of weather the play could be performed with women instead of men.

The piece was performed in UmeĂĄ as a staged reading with three of the women who took part in the squat in 1983: Charlotte Nordenfors, Gunilla Nordenfors, Kerstin Norlander as well as Gritt Uldall-Jessen, myself and artist Malin Arnell who performed as the tree.